Warner has been treating sick trees in Mesa AZ. for over 50 years. If you look to the left there are links to our other web sites. There is also a link to our YouTube channel. So if you live in Mesa AZ. or the surrounding areas give us a call. Thanks..

The unrelated sawyer beetles (Monochamus) and some other wood-boring beetle taxa (especially Cucujoidea) are sometimes called "bark beetles", too.

A bark beetle is one of about 220 genera with 6,000 species of beetles in the subfamily Scolytinae. Traditionally, this was considered a distinct family Scolytidae, but is now understood to be very specialized members of the "true weevil" family (Curculionidae). Well-known species are members of the type genus Scolytus, namely the European elm bark beetle S. multistriatus and the large elm bark beetle S. scolytus, which like the American elm bark beetle Hylurgopinus rufipes, transmit Dutch elm disease fungi (Ophiostoma). The mountain pine beetle Dendroctonus ponderosae, southern pine beetle Dendroctonus frontalis, and their near relatives are major pests of conifer forests in North America. A similarly aggressive species in Europe is the spruce ips Ips typographus. A tiny bark beetle, the coffee berry borer, Hypothenemus hampei is a major pest on coffee plantations around the world. 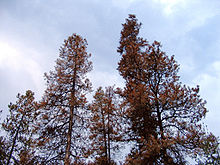 Bark beetles reproduce in the inner bark (living and dead phloem and cambium tissues) of trees. Many species, such as the mountain pine beetle (Dendroctonus ponderosae) attack and kill live trees. Most, however, live in dead, weakened, or dying hosts.[1] Bark beetles play an important role in forest ecology, for example by creating complex early successional forest. Infestations can have significant economic impact.[2] In undisturbed forests, bark beetles serve the purpose of hastening the recycling and decomposition of dead and dying wood and renewing the forest. A few species are aggressive and can develop large populations that invade and kill healthy trees and are therefore known as pests.

Bark beetles of the family Scolytidae feed and breed between the bark and the wood of various tree species, including spruces. More than 20 species feed on weakened, dying, or dead spruce, fir, and hemlock.[3] Most restrict breeding area to one part of the tree: twig, branch, stem, or root collar. Some breed in trees of only one species, others in trees of many species.

Bark beetles often attack trees that are already weakened by disease, drought, smog, overcrowding, conspecific beetles, or physical damage. Healthy trees may put up defenses by producing resin or latex, which may contain a number of insecticidal and fungicidal compounds that can kill or injure attacking insects, or simply immobilize and suffocate them with the sticky fluid. Under outbreak conditions, the sheer number of beetles can overwhelm the tree's defences with resulting impacts on the lumber industry, water quality, fish and wildlife, and property values.[4]

According to the United States Department of Agriculture, native bark beetles can cause high levels of tree mortality in California.[5] Massive outbreaks of mountain pine beetles in western North America after about 2005 have killed millions of acres of forest from New Mexico to British Columbia.[6] The outbreaks could be a consequence of global warming: the warmer winters in the region allow various species to expand their ranges and proliferate.[7] Most studies of wildfire after beetle outbreaks have found no effect of beetle-caused tree mortality on wildfire size or severity.[8][9][10] 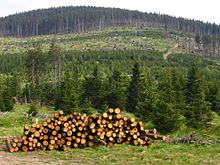 Management of bark beetle infestation in the Šumava National Park in the Czech Republic's Bohemian Forest has been controversial with some advocating non-intervention and others supporting harvesting of infested old-growth trees.[11]

Some bark beetles form a symbiotic relationship with certain Ophiostomatales fungi, and are named "ambrosia beetles" after these "ambrosia fungi". The ambrosia beetles (such as Xyleborus) feed on fungal "gardens" and are one of only three insect groups known to farm fungi. The other two groups are ants and termites, neither of which is particularly closely related to beetles. Courtesy of the fungus, ambrosia bark beetles are able to indirectly feed from many more species of trees than their evolutionary relatives that do not feed on fungi, by having the fungi do the work of overcoming the plants' chemical defenses. The beetles carry the fungal spores in special structures, called mycangia, and infect the trees as they attack them.

Like many other insects, Scolytinae emit pheromones to attract conspecifics which are thus drawn to trees already colonized by bark beetles. This can result in heavy infestations and eventually death of the tree. Many are also attracted to ethanol, one of the byproducts of microbial growth in dead woody tissues.

I hope you found this page about Bark beetle useful. If you have any questions about Tree Disease please contact our Tree Service to schedule an appointment. We have been treating sick trees for over 50 years. We currently serve, Mesa AZ, Gilbert AZ, Chandler AZ, Scottsdale, Phoenix AZ and all of Maricopa County AZ.